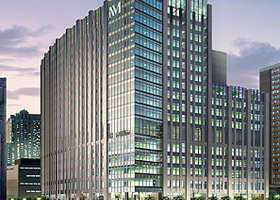 The New Prentice Women’s Hospital is a 17-story project for the highly respected Northwestern Memorial Hospital (NMH) Women’s program. It is the largest center of special care for infants in the country, and is among the top three maternity centers in the country by volume of births, with a capacity for 13,000 deliveries a year.

The Prentice Women’s Hospital opened on-time and on-budget, partly in thanks to E-Cube’s untiring efforts on our behalf. NMH actually brought the E-Cube team in earlier on this project and the results were impressive. The punch list items, needing attention after move-in, were minimal.”